In health and disease – who is who in the bone marrow 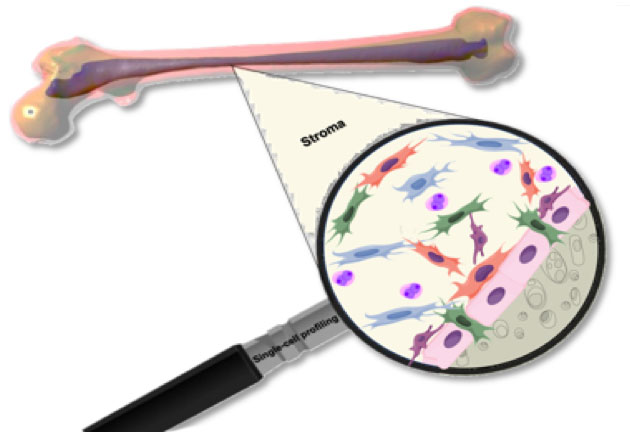 Non-hematopoietic multipotent adult stem cells of the bone marrow stroma build up an environment, a stem cell niche, specialized to support and regulate adult hematopoiesis. Mesenchymal stem cells (MSCs), having the potential to differentiate into bone, fat or cartilage play a central role in the make-up of the hematopoietic stem cell (HSC) niche. These intriguing cells have usually been profiled using marker genes or genetically modified mouse reporter strains. Studies analyzing pre-defined cell populations usually underestimate the bone marrow’s diversity as they miss other non-hematopoietic cells of the bone marrow, also contributing to the niche.

Animal models have revealed that the HSC niche can be a key player in the initiation and progression of myelodysplastic degenerations and that malignant growth is accompanied by niche remodeling. To assess the changes in the stroma induced by the emergence of leukemia, we compared differences of scRNAseq derived stromal cell populations in healthy and MLL-AF9 knock-in bone marrow transplanted mice. We observed coupled cellular shifts in key stroma populations of the bone marrow induced by leukemia (e.g. BMECs, OLCs, fibroblasts and chondrocytes). Further, we detected cellular shifts within subclusters of the same cell population. Most prominent was a blockage in osteolineage development indicated by a decrease of committed MSCs within the Lepr-MSC family and an increase of the preosteoblast cellular subset in the OLCs. This is consistent with reports from patients with acute myeloid leukemia (AML) suggesting that leukemic cells display changes in the microenvironment altering bone formation and breakdown.

The leukemia induced restructuring of the bone marrow stroma further involved key hematopoietic regulatory factors. More specifically, there was a marked downregulation of hematopoietic promoting factors in multiple stromal cell types. Conversely, we detected a notable upregulation of Cxcl12, a major stem cell factor, in a specific fibroblast subset that might be a niche cell with specialized supportive function in cancer. Given that Cxcl12-secreting cancer-associated fibroblasts, are known to promote solid tumor progression, our data suggest that leukemic cells specifically remodel the bone marrow microenvironment, compromising normal cellular differentiation and hematopoiesis towards a cancer supporting environment.

Our study provides new insights into the ways the bone marrow stroma as an adult stem cell niche is remodeled to accommodate leukemia progression. The described interaction of tumor and stroma cells once more points towards the stem cell niche as a promising target for specifically tailored therapies.