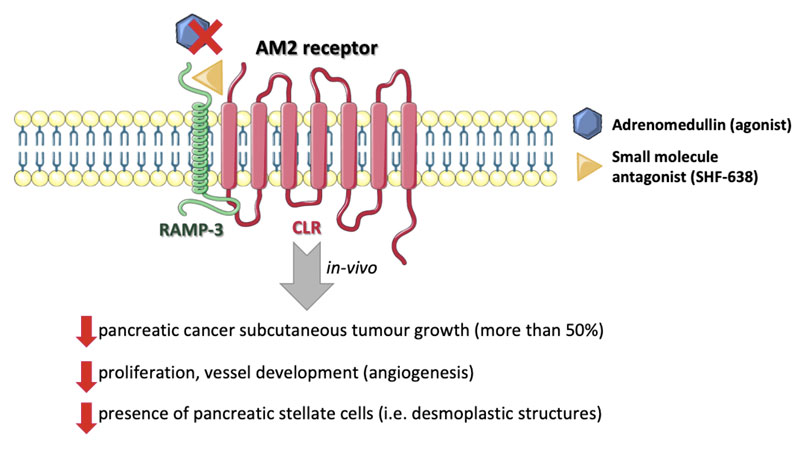 Pancreatic cancer is the 11th most common cancer type in the UK. The survival rates are among the lowest in the UK which is directly reflected by its mortality rates that keep raising. Existing therapies include surgical removal and cytotoxic chemotherapeutic cocktails which have minimal improvement in life expectancy. Adrenomedullin (AM) is a multifunctional peptide that exerts its actions through activation of AM receptor a member of GPCR superfamily. The physiological role of AM as an important regulator of blood pressure is well established. However, emerging data suggest its involvement in several aspects of tumour development including cancer cell growth, angiogenesis, cell survival and the communication between the tumour cells and the host microenvironment. This study aims to develop novel small molecule antagonists against AM2 receptor. Using a structure/knowledge-based drug modelling program, based on published crystal structures of CGRP and AM1 receptors and recently developed CGRP receptor small molecule antagonists we were able to design and screen a large library of potential antagonists. Novel compounds were screened for their ability to inhibit cAMP production in CGRPr, AM1r, AM2r AMY1r and AMY3r overexpressing cells. This resulted in the development of a primary structural family with high potency and selectivity against AM2 and CGRP receptors. Several members of this family such as SHF-638, showed high selectivity for AM2 receptor when compared with CGRP. Pharmacological evaluation of SHF-638, using Schild regression analysis, suggested a competitive mode of antagonism. Moreover, SHF-638 was proven as an excellent tool for in-vitro and in-vivo use. In-vivo administration of SHF-638 resulted in significant decrease of breast and pancreatic cancer subcutaneous tumour growth. Inhibition of AM resulted in decrease proliferation, vessel development and increase in necrosis. Decrease in the presence of pancreatic stellate cells was also observed suggesting involvement of AM in the development of desmoplastic structures. Overall, the findings of this study suggest that blocking the effects of AM not only influences the development and growth of tumors but is also affecting the tumour microenvironment, feature that could potentially be used for overcoming chemotherapeutic resistance.