Identification and characterisation of mitotically quiescent sub-clones in breast cancer 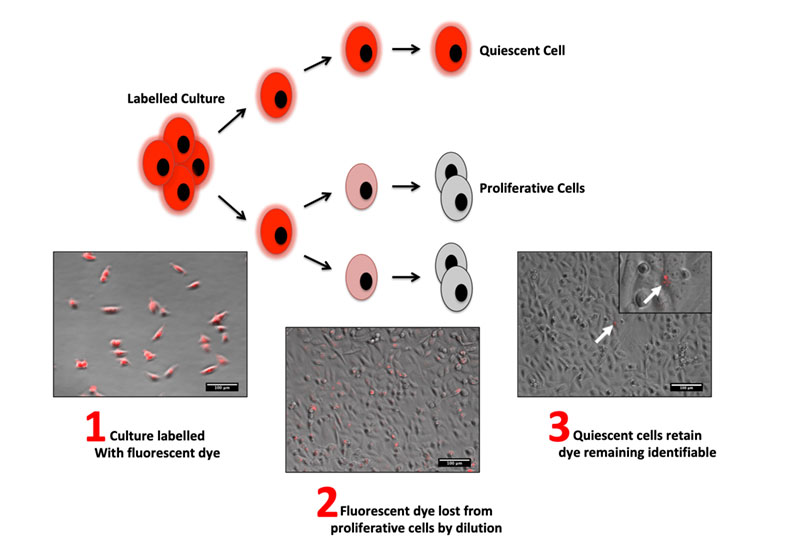 Metastatic disease is the major cause of death in advanced breast cancer and is supposed to be initiated by a sub-population of cancer stem cells (CSCs) that disseminate from the primary tumour at an early stage in disease pathogenesis. Detailed insight into the biology underpinning the emergence and survival of the CSC population will therefore likely be critical to the development of therapeutic strategies for prevention of breast cancer relapse. However, the isolation of CSCs based on specific marker signatures is increasingly recognised as being unreliable due to population plasticity and the ambiguous functional significance of the markers used. A number of relatively recent studies have reported pulse-chase techniques using lipophilic fluorescent dyes that enable the prospective isolation of live CSC populations based on their inherently quiescent nature.

The main aim of this thesis was to establish a lipophilic dye retention method for the isolation of mitotically quiescent human breast cancer cells from commercially available cell lines grown in vitro, and to establish whether quiescence was associated with characteristics of the purported metastasis-initiating breast CSC population. A latent quiescent sub-population accounting for < 2% of the total cell population was identified in the MCF-7, ZR-75-1, MDA-MB-468, MDA-MB-231 and SK-BR-3 human breast cancer cell lines based on their ability to retain the lipophilic fluorescent dye Vybrant® DiD. The relatively quiescent nature of dye-retaining cells was confirmed by their tendency to collect in the G2/M-phase of the cell cycle and by a significant enrichment with cells that were Ki67–(G0-phase) following immunostaining. The quiescent sub-population was shown not to be an intrinsic feature of the cell lines in which they were identified, but that they could emerge spontaneously within isolated rapidly dividing cultures. Immunoprofiling of quiescent cells illustrated only a partial overlap with the CD44+CD24-/lowsignature commonly used to identify breast CSCs but showed a significant enrichment for cells that were CD44+CD24+and ALDH+. Quiescent cells also displayed an enhanced ability to survive chemotherapy and exclusively contained sub-clones capable of subsequent outgrowth. Further characterisation of this population could identify novel therapeutic targets for elimination of the cells responsible for de novo drug resistance and breast cancer recurrence.