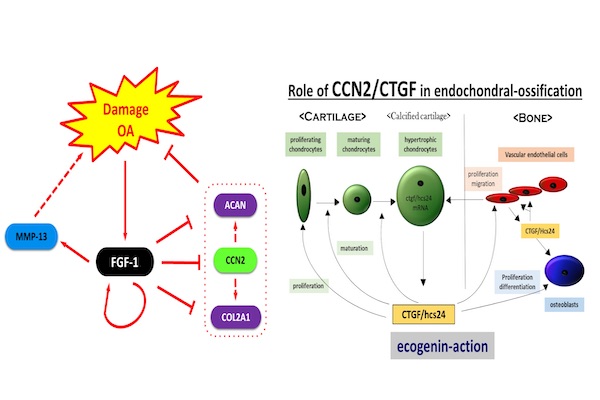 Fibroblast growth factor 1 (FGF-1) is a classical member of the FGF family and is produced by chondrocytes cultured from osteoarthritic patients. Also, this growth factor was shown to bind to CCN family protein 2 (CCN2), which regenerates damaged articular cartilage and counteracts osteoarthritis (OA) in an animal model. However, the pathophysiological role of FGF-1 in cartilage has not been well investigated. In this study, we evaluated the effects of FGF-1 in vitro and its production in vivo by use of an OA model. Treatment of human chondrocytic cells with FGF-1 resulted in marked repression of genes for cartilaginous extracellular matrix components, whereas it strongly induced matrix metalloproteinase 13 (MMP-13), representing its catabolic effects on cartilage. Interestingly, expression of the CCN2 gene was dramatically repressed by FGF-1, which repression eventually caused the reduced production of CCN2 protein from the chondrocytic cells. The results of a reporter gene assay revealed that this repression could be ascribed, at least in part, to transcriptional regulation. In contrast, the gene expression of FGF-1 was enhanced by exogenous FGF-1, indicating a positive feedback system in these cells. Of note, induction of FGF-1 was observed in the articular cartilage of a rat OA model. These results collectively indicate a pathological role of FGF-1 in OA development, which includes an insufficient cartilage regeneration response caused by CCN2 down regulation.

Full text of Dr A. El−Seoudi’s thesis is available from HERE