Low back pain with Modic changes: anti-resorptive treatments may have an effect 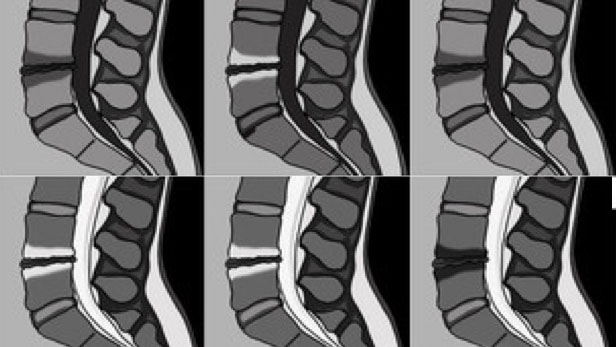 Chronic low back pain (LBP) is the most common cause of disability, with more than 85% of LBP having no specific pathologies. There are only a few treatment options for LBP with modest effects, and the development of new treatments may have been limited by the poor understanding of the causes of pain.

Epidemiological studies have found that Modic changes are strongly associated with non-specific LBP and could be an independent source of pain and a treatment target. Modic changes are three types of vertebral endplate bone abnormalities visualised on MRI that can transform from one type to another. The term was firstly described by Modic et al., and the prevalence of Modic changes varies from 1.4% to 58% according to the age of the population. Type 1 Modic change is the initial stage indicating inflammation and edema, and this type is more likely to be associated with LBP; type 2 and 3 are more stable stages that represent fatty degeneration and bone sclerosis, respectively. Moreover, there is a significant difference in bone resorption among different Modic changes (Type 1 > type 2 > type 3). Modic changes have similar characteristics and MRI appearance to bone marrow lesions (BMLs) of the knee, for which anti-resorptive treatments have shown positive effects on BML size and knee pain. Therefore, anti-resorptive treatments may be effective for reducing LBP with Modic changes.

In our study published in Journal of Bone and Mineral Research, we conducted a 6-month, double-blind, placebo-controlled, parallel-group trial to evaluate the effect of two anti-resorptive treatments (both available on the market), on LBP and the size of Modic change. We enrolled 103 participants aged ≥ 40 years with significant LBP (Visual Analog Scale [VAS] ≥ 40) for at least 6 months and type 1, 2 or mixed Modic change. These participants were randomised to receive one dose of either zoledronic acid (5mg, infusion), denosumab (60mg, subcutaneous injection), or placebo at baseline. The main outcomes were changes in LBP assessed using VAS (0-100 mm) and the LBP Rating Scale (0-30), and the total size of Modic changes from T12 to S1 on MRI over 6 months. Given that LBP with more severe disc degeneration and neuropathic pain may be less responsive to any treatment, we measured neuropathic pain using the painDETECT questionnaire and disc degeneration of each intervertebral disc using the Pfirrmann Grading System for a post hoc analysis.

Ninety-four percent of the participants completed the trial. Compared to placebo, both zoledronic acid and denosumab non-significantly reduced LBP according to the VAS, and significantly reduced LBP assessed by the Rating Scale, over 6 months. However, neither influenced the overall size of Modic change. In a post-hoc analysis, both treatments had significant benefit for LBP in patients with type 1 Modic change, milder disc degeneration and non-neuropathic pain. Furthermore, denosumab significantly decreased the size of type 1 Modic change compared to placebo. These findings indicate that anti-resorptive treatments may work better for Modic change-related LBP at an early stage with non-neuropathic pain.

The effects of both zoledronic acid and denosumab on LBP occurred early (1 and 2 months, respectively) and were maintained to the end of the trial. The early effect of zoledronic acid on LBP was consistent with its rapid effect on bone turnover markers in other diseases, suggesting a correlation between bone turnover and pain. While the effect of both agents on bone resorption wears off quickly, we did not observe any worsening of pain at the end of the trial, and this should be explored in further trials with longer follow-up. Overall, our findings suggest a potentially new application of existing drugs for a common phenotype of LBP.

These findings are described in the article entitled “Effect of Zoledronic Acid and Denosumab in Patients With Low Back Pain and Modic Change: A Proof-of-Principle Trial” published in Journal of Bone and Mineral Research. This work was conducted by Guoqi Cai, Laura Laslett, Dawn Aitken, Feng Pan, Petr Otahal, Tania Winzenberg and Graeme Jones from Menzies Institute for Medical Research, University of Tasmania, Hobart, Australia in collaboration with Andrew Halliday and Deborah Speden from Royal Hobart Hospital, Hobart Australia. The trial was funded by Tasmanian Community Fund.