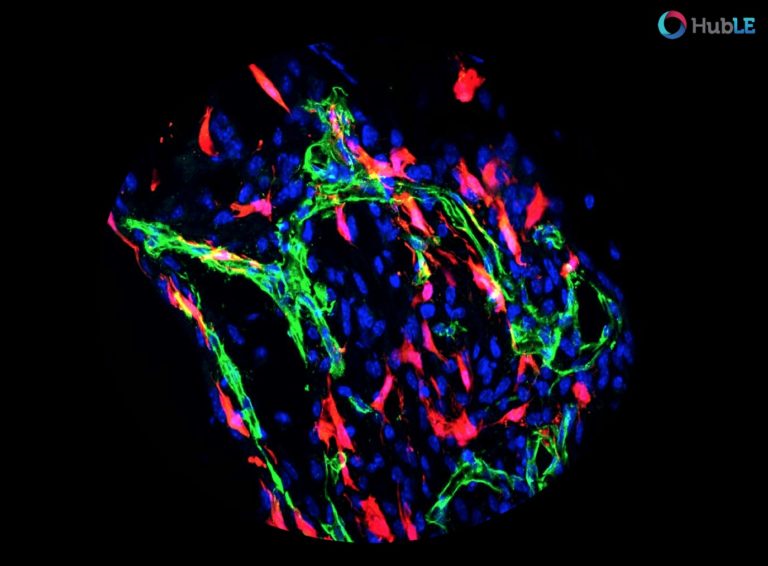 Bone fractures represent a major worldwide health problem. This problem is expected to worsen even more in the future, because the increasing ageing of the population is leading to a growing incidence of osteoporosis-induced fractures. Advancing our knowledge on the cell populations and signals mediating skeletal repair is essential to guide the development of tissue-engineering and cell therapy approaches for bone regeneration.

Bone formation during development, growth, bone remodeling, and fracture repair critically depends on the expansion of osteogenesis-competent skeletal stem and progenitor cells (SSPCs) and their efficient recruitment to sites in need of bone formation. Our previous studies showed that osterix-expressing (Osx+) osteoprogenitor cells (OPCs) infiltrated fetal bones along with their initial vascular invasion, where they expanded, and contributed to new bone formation. These findings indicated that Osx+ cells represent or contain SSPCs, and that a fraction of them existed as perivascular cells, wrapped around the blood vessel walls. Interestingly, Osx+ perivascular SSPCs were also observed during fracture repair. As the bone repair process largely resembles bone formation during fetal development, understanding the behavior of fetal SSPCs could have therapeutic potential. We therefore wanted to gain insights in the mechanisms of SSPC expansion and migration to blood vessels during bone development and repair, as these so far remained largely unknown.

In our study, recently published in Developmental Cell, we used advanced genetic technologies to profile fetal Osx+ cells and gain new insights in the specific traits of these skeletal progenitors. Our results showed that Osx+ cells strongly express PDGFRβ, the tyrosine kinase cell-surface receptor for platelet-derived growth factors (PDGFs), and identified PDGFRβ as a marker for reparative SSPCs, including especially those residing around blood vessels.

Using mice in which we could map the fate of Osx+ or PDGFRβ+ cells, we found that bone trauma activates multiple cell subsets marked by a history of Osx- and PDGFRβ-expression to establish the repair tissue, thus identifying these cells as key sources of reparative SSPCs. In fact, virtually all cells contributing to the repair tissue (known as the fracture callus) derive from Osx- and PDGFRβ-expressing cells.

To investigate the functional role of signalling through the PDGFRβ receptor in bone fracture repair, we next generated mice in which the receptor was inactivated in the Osx+ cells. These “PDGFRβ cKO” mice, when subjected to a tibia fracture, displayed marked changes in bone healing, characterized by an altered tissue composition and poor vascularization of the fracture callus. These findings indicated an important role for PDGF – PDGFRβ signaling in Osx+ cells in skeletal repair following a bone trauma.

To understand more precisely how PDGFRβ signalling mediates bone repair, we used in vitro model systems, molecular analyses, and in vivo immunofluorescent stainings, and discovered that three major mechanisms contributed to the defective bone repair in PDGFRβ cKO mice. Firstly, PDGFRβ signaling is required to maintain the proliferation capacity of SSPCs and prevent their differentiation, thereby controlling the generation of a sizable, reparative cell pool. Secondly, PDGFRβ activation induces SSPC migration and invasion, at least in part through MMP-9 as direct downstream effector of PDGF-PDGFRβ-MEK-ERK signaling. And thirdly, PDGF-PDGFRβ signaling plays an important role in the communication between SSPCs and the endothelial cells of the blood vessels. This crosstalk contributes to the recruitment of SSPCs to blood vessel walls, likely involving the adhesion molecule VCAM-1.

In conclusion, we found that reparative SSPCs require PDGFRβ signalling to expand, migrate, and associate with blood vessels, and thereby ensure proper bone repair. By uncovering molecular and mechanistic aspects underlying the beneficial effects of PDGF in bone repair, our work will stimulate further research into orthopaedic applications based on the PDGF pathway.